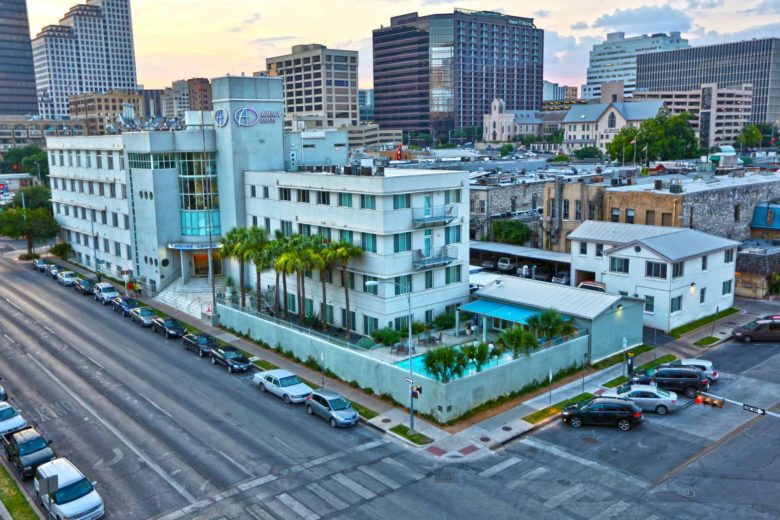 Avenue Lofts, located at 410 East Fifth Street in downtown Austin, might be the city’s most architecturally underrated residential property. This 1940s state office building, adapted for condo use by local real estate development firm the Sutton Company in 1999, retains the original Art Moderne stylings common for many institutional buildings of the era — in fact, the 1938 fire station at Brush Square just across the street embodies the same style, the two buildings mirroring one another’s curves and understated ornamentation. The Avenue Lofts building seen from above. Image: Twist Tours

The half-block now occupied by the lofts, bordered on three sides by Trinity, Neches, and East Fifth Streets, has a history as good as any piece of land in downtown Austin — and it starts, as many of these stories do, with Edwin Waller’s original 1839 plan for the City of Austin. Waller’s plan designates four public squares in the downtown area, three of which are still around. On the original city plan, the half-block directly north of Brush Square now home to the Avenue Lofts is labeled “market.” A selection from Waller’s original 1839 city plan, showing Brush Square and the half-block to the north of it now home to the Avenue Lofts, labeled at the time as a “market” space. Image: Austin History Center

Just as Brush Square served for many years as a place for farmers to sell their cotton crops, the half-block above it was used as an open market space for many years after the city’s founding. Austin’s first railroad line, laid in 1871, originally ran down East Fifth Street between Brush Square and the market space, and an 1872 update to the city plan names the market square as the future site for a passenger railroad depot. The fancy depot was never actually built, and for decades, passengers exited the train on a small platform located on Fifth Street. It shows up in cartographer Augustus Koch’s 1873 hand-drawn map of Austin:

A detail from an 1873 illustrated map of Austin, showing the rail line that originally ran down Fifth Street between Brush Square and the public market area now home to the Avenue Lofts. The small rail platform used by train passengers for many years is visible at the corner of Fifth and San Jacinto Streets. Image: Wikimedia Commons

The rail line was later relocated, but the market spaces on either side of Fifth Street flourished. By the 1880s, the row of buildings developed along the block of Sixth Street between Trinity and Neches Streets were designed to face both Sixth Street in front, and the bustling market square behind. This architecture is visible in Koch’s 1887 version of his illustrated map, and the buildings still stand today:

The buildings seen facing the market square north of Brush Square in Koch’s 1887 illustrated map (left) are pretty much the same in the present day (right) despite the construction of the offices that later became the Avenue Lofts atop the former public space below them, which means these days the rear facades of the historic buildings only face an alley. Images: Wikimedia Commons / Google Maps

Now that the Avenue Lofts building occupies the former market square, the originally elaborate rear entrances of these historic buildings simply face an alley, and are heavily retrofitted with electrical and air conditioning equipment. Still, the architectural character on display at the back ends of these structures might clue you in that they were originally designed to be seen. Helpfully, this alley is walkable in 3D via Google Street View, giving us a much closer look:

Around 1900, when the Alliance Cotton Yard operated on Brush Square as a marketplace for local farmers, the half-block to the north served as a feed lot and wagon yard for weary human and equine travelers: By 1924, Austin’s city directory stated that Brush Square was again being used as a public park space, probably reducing the need for a wagon yard at the market square across the street. In the late 1920s, the Texas State Legislature began considering a plan to absorb the Pasteur Institute — a rabies treatment clinic and vaccine research laboratory originally established by the legislature on the grounds of the Austin State Hospital in 1903 — into the purview of the state health department, and build a new laboratory at the former market square half-block, which like the rest of the public spaces laid out in the Waller plan was originally state-owned property. A 1928 Austin American article about the opening of the new state laboratory in the 400 block of Fifth Street. One of the Sixth Street buildings designed with a rear entrance facing the former market square at this site is partially visible on the far right side of the photo, behind the new laboratory. Image: Austin History Center

After the legislature passed $25,000 in appropriations for the facility in 1927, the new Pasteur Institute opened at the former market square site on Fifth Street in late 1928. This consolidated facility housed not only the Institute’s work, but also the state’s food, drug, and bacteriological research laboratories — which manufactured vaccines for everything from typhoid fever to diphtheria, checked food for impurities, and performed forensic analysis for at least one high-profile local murder trial where detectives suspected the use of poison. In its first decade of operation, ever-increasing demand for the facility’s vaccine production and other services resulted in quick growth, with a two-story addition constructed atop the original building only a few years later in 1934.

Perhaps the most notable feature of the newly-expanded laboratory was a climate-controlled “insectorium” for breeding mosquitos, used to research an experimental treatment for the severe neurological effects of late-stage syphilis which involved deliberately infecting patients with malaria via mosquito bites.

Known as malariotherapy or pyrotherapy, its discovery by Austrian psychiatrist and “enthusiastic Nazi” Julius Wagner-Jauregg earned him a Nobel Prize in 1927 — and though this approach killed roughly 15 percent of its test subjects, the unorthodox method’s fairly high success rate was considered a miracle cure in a pre-penicillin world. By the same token, malariotherapy found itself quickly forgotten when state health departments, Texas’ own laboratories included, began mass-producing penicillin in the early 1940s. Only a decade after the opening of the original laboratory at Fifth Street, officials at the state health department urged the legislature to pursue further expansion for the department to consolidate its offices and extensive record-keeping operations, which stored millions of medical records including birth and death certificates and represented a significant fire hazard in a building not specifically designed for it.

With support (and perhaps a bit of cajoling) from then-Congressman Lyndon B. Johnson, President Roosevelt approved a $135,000 PWA grant to support existing state funds for the construction of a new health department building at the Fifth Street site, which would integrate the existing lab structure while adding much-needed office space for the organization’s more bureaucratic operations. Local architect and University of Texas graduate John Linn Scott designed the new state health building entirely out of reinforced concrete, and its look is fairly typical both for its era and compared with the variety of other institutional projects he took on with his firm between 1940 and his death in 1970, including hospitals, elementary schools, and public housing developments (Austin Fire Station 16, a nice little midcentury example of Scott’s work, still stands in the Crestview neighborhood).

The state health building’s subtle Art Moderne details, particularly visible in the curved forms and window placement of its main entrance, is likely the finest expression of the architect’s legacy in the Austin area. The structure broke ground in March 1942, with its grand opening celebrated in July 1943. The finished office building for the Texas State Department of Health at 410 East Fifth Street, as seen in an Austin Statesman article celebrating its grand opening in 1943. Image: Austin History Center A photo of Dr. George W. Cox, state health officer, at the entrance of the Texas State Department of Health’s new office building at its 1943 opening, as seen in the Austin American. Image: Austin History Center Still, the department outgrew its office fast, even after expanding with the construction of an extra floor on the building’s west wing in 1945 and another on the east wing in 1948. In 1952, the offices held more than nine million paper birth and death records in its basement archives, and by 1955, a new facility, more than twice as big as the old building and ringing up at an estimated $5 million, was already in the works — to be located near the triangle formed by the merging of Guadalupe Street and North Lamar Boulevard.

Unsafe conditions and overcrowding at the downtown location were cited by department officials, who claimed these issues were so severe that several lab workers had actually infected themselves with the viruses they were trying to study. The new facility, designed by architects Page Southerland Page at 1100 West 49th Street, was dedicated in November 1958. A 1958 article in the Austin Statesman describing the opening of a new Texas State Department of Health facility at 1100 West 49th Street, which remains the headquarters for the Texas Department of State Health Services to this day. Image: Austin History Center

Even with the Department of Health’s expansion, the state government had themselves a perfectly good office building at 410 East Fifth Street for people not working with infectious diseases. Along with the archive operations of the health department’s Bureau of Vital Statistics, which remained at the old site, various agencies occupied space for decades in what was later dubbed the Anson Jones State Office Building, including the Texas Department of Commerce and Texas Department of Transportation. Looking west towards the Avenue Lofts building and the rest of downtown Austin. Image: Twist Tours

In 1996, following years of speculation regarding the future of this and other underutilized state-owned downtown properties, then-Governor George W. Bush authorized the sale of the Anson Jones tract for private development. One year later, real estate development firm the Sutton Company purchased the property, and began a $6 million conversion of the facility to a 37-unit condo community, with additional moderne design touches — including the building’s now-iconic porthole windows — by Austin architect Charles Fisk. Originally planned under the name O. Henry Lofts after the historic home of William Sydney Porter across the street at Brush Square, Sutton later decided on Avenue Lofts instead, and the name stuck. Outside of some additional renovation work completed in 2007, the building has remained basically the same since then — not just a great example of its era’s architecture, but a living reminder that historic structures can pull off a pretty impressive second act when they’re given the opportunity.