One of the many sites in downtown Austin with big things in store. Photo by James Rambin.

Happy Friday, everyone! I certainly hope you’re telecommuting (sheltering in place, as it were) on what might be Austin’s worst day of traffic all year, as the SXSW Doomsday Clock ticks towards midnight.

Of course, you might be one of the locals who actually likes large crowds, and if so, who am I to judge? Enjoy your panels on whatever the blockchain is supposed to be — but first, check out this boatload of updates, big and small, from projects all over the downtown area. After all, as a wise man once said, “If you wanna see some buildings, you gotta look downtown.” A current rendering of the office project at 916 Congress Avenue. Image: Sixthriver Architects

This six-story office project designed by Sixthriver Architects at 916 Congress Avenue (huh, lots of sixes there) is exactly the kind of thing I like to see on Austin’s main street. It brings vertical density and much-needed office space to the area, but still preserves the historic facade of the original building and is designed with the stepback required by the city’s Congress Avenue overlay for the west side of the street, so nobody can complain that it’s harming the historic district’s character or something silly like that. An illustration of the offices planned at 916 Congress Avenue, looking northwest from this perspective. Image: Sixthriver Architects

The property, formerly home to well-loved local coffee shop Little City, is now owned by an LLC connected with financial advisory firm Mastodon Ventures, with city backup documents and other filings also indicating the involvement of equity fund W Capital Partners and contracting firm The Burt Group. When the development was first announced back in 2010, it was designed by Sixthriver as a headquarters for the Texas Public Policy Foundation, but the organization apparently grew quickly enough to need more space than the 916 project could provide, so the architects designed a new headquarters at 901 Congress Avenue instead.

That means the tenant or tenants for the 916 building are still up in the air, although Sixthriver recently told me the project will have a ground-floor commercial tenant (retail, probably) in addition to the five stories of offices above. It’s been kicking around for almost a decade, but this development is back on my radar after its backers filed a permit with the city earlier this week for the installation of a tower crane at the site — which means something’s going on over there. A rendering of the office building planned at 1108 Nueces Street. Image: Sixthriver Architects

Here’s another recently-announced project designed by Sixthriver Architects and developed by the folks at Mid-City, who are doing quite a bit around this part of town. This one’s a five-story office building with 22,000 square feet of space on the site of a former law office at 1108 Nueces Street — three of these stories, however, are dedicated to the building’s parking garage, with only the top two floors containing office space.

Pretty wild that its parking levels outnumber its actual occupied floors — although that sort of design seems to be all the rage lately. Anyway, it’s got a small lease space on the ground floor that appears suitable for retail uses, though the rendering above seems to show a co-working tenant of some kind. The old design for the 300 Colorado tower when it was still a 44-story residential building. Images: GDA Architects

It’s been a strange ride for the tower by Cousins Properties and Riverside Resources in the planning stages at 300 Colorado Street. First it was a 44-story residential building, then we found out earlier this year that the developers were changing its usage to offices and oil drilling company Parsley Energy had already pre-leased the whole shebang. The building’s design got a reduction in height as well — we haven’t seen fresh renderings from GDA Architects since the changes, but plans are now reportedly for a 31-story tower, with 13 floors of parking and offices above that, along with a ground-floor retail space to be leased by Del Frisco Restaurant Group, the parent company of the Sullivan’s Steakhouse restaurant currently at the site.

Demolition permits are already filed at the address, though a definitive date is unknown. At least one recent city document shows a two-year construction timeline for the tower starting on May 1, 2019, but who really knows? A current view of the skybridge connecting the Hilton with the Austin Convention Center. It’s not yet open to pedestrian traffic. Photo by James Rambin.

Only the latter is currently open to pedestrian traffic, but we should be able to traverse the Hilton’s bridge within a couple of months. Also, the Fairmont Austin is open now. The less said about that, the better. A view of the Villas on Town Lake condos while they were still occupied last year. The complex is now vacant, with early plans for a 40-story residential tower development at the site. Photo by James Rambin.

This 1980s condo community and former chicken processing plant at 80 Red River Street, directly adjacent to the Rainey Street District, will soon be demolished to make way for a 40-story residential tower project by Dallas developer Genesis Real Estate Group, with potential for a second tower a little further down the road. A massing of a planned 40-story residential tower at the current site of the Villas on Town Lake condos. Image: Google Maps / James Rambin

The existing condos have sat vacant for a couple of months now, but yesterday engineering firm Consort filed a demolition permit for the 2.29-acre site — there’s no exact date yet, but it’s the biggest update we’ve seen on this development in quite a while. Here is a photo of some trees and birds and power lines, and also the Homewood Suites hotel under construction at 78-80 East Avenue.

The current conditions at the Block 36 site — it’s occupied by two gyms and an adjacent undeveloped lot. Fun fact, that’s my car in the shot. Not the van, genius. Photo by James Rambin.

We only know a little about the project planned by developer Transwestern on the 1.8-acre block bounded by East 3rd and 4th Streets, the I-35 Frontage Road, and Waller Creek — that’s Block 36 of the original plan for downtown Austin, hence the name.

According to a few city filings for the development, it’s a four-story multifamily building with 263 total units split between studios, one-bedroom, and two-bedroom. There’s also 4,500 square feet of retail space on the ground floor, and underground parking. Some elevations for the Block 36 multifamily building — no renderings yet. Image: Wilder Belshaw Architects

That block’s almost entirely covered by the Waller Creek Plaza Capital View Corridor, a convenient explanation for the project’s limited height. We do know that the potential building’s architect is Dallas-area firm Wilder Belshaw Architects, which now has a second office here in town and a local multifamily portfolio including The Arnold, 5th Street Commons, and East Austin micro-unit concept Indie Apartments. Okay, I’m breaking my own rules on sticking to downtown and venturing south of the river for this one, just to mention the announcement from earlier this week that prominent Chicago architecture and urban planning firm Skidmore, Owings & Merrill have joined developer Endeavor Real Estate Group to design what will probably end up being a massive mixed-use project on the 19-acre tract currently occupied by the offices of the Austin American-Statesman.

SOM, the designers behind famous buildings like Willis Tower and our very own LBJ Library, could bring a truly groundbreaking design to the downtown-adjacent property — let’s hope something like that drawing up there from the South Central Waterfront Initiative isn’t just wishful thinking, huh? 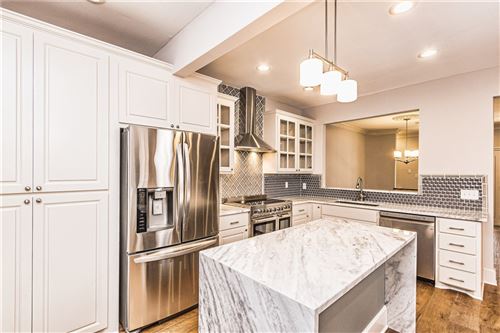 $1,735,000
38
View Virtual Tour
Previous Post: « Does Austin Energy’s New Downtown Substation Have to Suck?
Next Post: Here’s What We Learned From Our Fabulous Austin Survey »