The current conditions at 425 West Riverside Drive, where a mixed-use office building is planned. Photo by James Rambin.

The residents of the Bouldin Creek neighborhood in South Austin must really love wings. That’s at least the impression I’m getting from a recent Austin Monitor article covering the Stream Realty Partners development of a mixed-use office building at 425 West Riverside Drive, a large triangular lot occupied by the city’s only Hooters restaurant and not much else. Let’s take a second to catch up — I’ve marked the punch line in red for your convenience:

Ronald A. Nelson and Molly Belle Properties are requesting a zoning change from General Commercial Services (CS) to Planned Unit Development (PUD) for the 1.45-acre property at 425 W. Riverside Drive. The zoning change will accommodate their intended 195-foot building. Under the current commercial zoning, the maximum height the building can be is 60 feet.

As part of the PUD, the proposed project offers a number of community benefits that would not otherwise be part of the existing zoning. These benefits include ground-floor retail, increased number and variety of trees, 4,300 square feet of landscaping including green roofs, enhanced green water quality controls, the extension of the city’s reclaimed water system into the South Central Waterfront district, and the water quality treatment for a portion of Barton Springs Road.

Becoming environmentally superior to the current state, however, is not a high bar. “The site is nearly 100 percent impervious cover,” said Andrea Bates, who is the environmental program coordinator for the Watershed Protection Department. Furthermore, there is no impervious cover mitigation on the property. According to her, the closest thing to landscaping is the one tree on the property, which happens to be an invasive species.

Despite this, Commissioner Linda Guerrero noted, “I know that the neighborhood association isn’t keen on this PUD.”

According to Commissioner Pam Thompson, the building’s proposed height is behind the neighborhood association’s dislike of the project. So that the neighborhood doesn’t have to gaze at a “box,” the developers have fashioned a compromise that includes the installation of tiered green roofs.

Austin’s affluent, downtown-adjacent neighborhoods resisting development isn’t exactly breaking news, but this particular complaint stuck in my craw more than usual — probably because in this case, residents are fighting a building that would replace a massive empty lot comprised almost entirely of impervious cover, with a breastaurant in one corner that doesn’t even have good Yelp reviews. When they’re not smashing eggs at city council meetings, the toolkit of our local preservationists tends to include concerns about increased traffic, rising property taxes, and the demolition of older properties to make way for new developments, a process that dilutes the existing character of a neighborhood — and in certain situations, many of these concerns are actually valid, at least in part.

But if I’m taking the Bouldin Creek Neighborhood Association at its word — and I have to, since they won’t answer my emails — the main complaint here is about the building’s height. There’s certainly no accounting for taste, but the renderings don’t make it seem boxier than any other large office building, with its triangular shape, green roofs, and textured walls breaking up the silhouette even further. It’s not the prettiest I’ve ever seen, but I still don’t get the problem. Another view of the proposed building. Image: Stream Realty Partners

Anyhow, according to the article quoted above, the planned tower is 195 feet tall. It would usually be hard to eyeball something like that, but for this project, we’re in luck: The Catherine apartment tower, located just one block away from this site, is 208 feet tall, and that’s close enough for me to consider it a good stand-in for the proposed building — we’ll chalk up the 13-foot discrepancy to The Catherine being further from Bouldin Creek by a few hundred feet. Either way, if you’re somewhere in the neighborhood and you can see The Catherine, you’ll most likely be able to see this new building. So, in the interest of gaining a deeper understanding of Bouldin Creek’s opposition to the project, I decided to take some photos at various spots in the neighborhood where towers were visible, in order to estimate how much of an impact the new building would have on residents’ views. I’ve pointed out The Catherine’s location in each of these photos to give you a better idea of the possible new building’s appearance in the skyline: I’m not really including the apartments at the edges of the neighborhood in this analysis, since I don’t think folks living in a taller, denser multifamily building worry as much about their views as single-family homeowners. Still, I took some pictures from the apartment complexes along South First Street to get an idea of their perspective. I honestly thought The Catherine would be more visible than this — from the street level, these photos are some of the few places in the entire neighborhood that you can see it. Of course, I know you’d probably have a better view from your second-story deck or whatever, so this isn’t quite a slam dunk. I wanted to get a little more detailed, so here’s what I came up with: This map shows the minimum distance in feet between the Bouldin Creek neighborhood’s single-family residences and the site of the office building planned at 425 West Riverside Drive. To ensure I’m working in good faith, I’ve made this measurement from the absolute closest single-family residences in the neighborhood — as the grackle flies, at least — and 1,046 feet is the shortest possible distance I can find between the neighborhood and the new development.

I’ve failed my fair share of algebra, but I always had a knack for astronomy, and I know that the measure of angular size is often used to describe the apparent, not actual, size of objects in space as seen from the stargazer’s perspective — in other words, the angle subtended to an observer by an object of a given size at a given distance. You can perform that calculation with a building and get a rough approximation of the space taken up in your field of vision by the structure at whatever distance you are from it — emphasis on rough, guys.

Since the minimum distance from Bouldin Creek to the project’s site is 1,046 feet, and the height of the proposed building is 195 feet, you’re basically just looking for an unknown angle in a right triangle, in this case from the position of an observer in the neighborhood looking towards the building 1,046 feet away. Here’s a fancy equation:

But what does 10.65 degrees — or 639 arcminutes, if you prefer — even look like? If your astronomy professor was cool, they might have told you that the width of your fist held at arm’s length subtends about 10 degrees of the sky, at least accurately enough to use for approximating various measurements when you’re out and about and didn’t pack your theodolite.

Seriously, go stand at the very edge of Bouldin Creek and hold out your fist like in the photo below. That’s about how tall the building’s going to appear from the very boundary of the neighborhood, and it’ll look far smaller from most of it. Of course, you’ve got to make sure your fist is level with the ground, which I didn’t do in the photo because I wasn’t actually measuring anything. Seeing the photo I took doesn’t even do it justice, since your eye works a little differently than a camera — you’ve got to try it in person. You’d get a much better impression of the building’s size if you did this from the ground, naturally. Photo by James Rambin.

The challenge with calculating perceived visual size is that our brains aren’t always seeing things consistent with their measurements — we may perceive an object as larger if it’s surrounded by smaller objects, or vice versa. Our familiarity with an object may also change how we perceive its size, as your brain tends to “edit out” things you’re familiar with when you don’t need to see them.

In fact, recent research suggests that emotional arousal actually moderates the brain’s perception of height. Sadly, that means some residents of Bouldin Creek will probably always see this building as being much taller than it actually is — but that doesn’t mean the problem has ever existed anywhere outside of their heads. 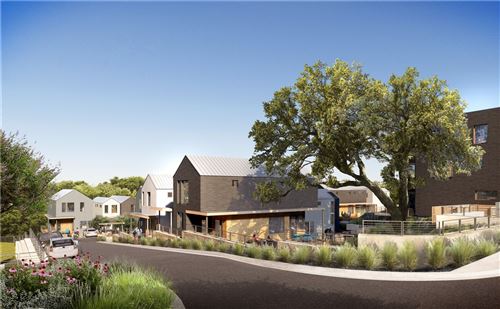 $770,000
33
Previous Post: « You Are Here: Windsor Park
Next Post: Long Before Carmelo’s It Was the Depot Hotel, Now Take a Peek at What’s Being Planned »