When plans first emerged last year for the West Campus development of a Moxy Hotel, Marriott International’s boutique-esque chain seemingly intended to corner the wallets of the millennial set, details were scarce enough that I spent most of my time ranting about the brand’s dreadful marketing, which appeared as adept at capturing the hearts and minds of young people as a politician dancing the Nae Nae. The back of the abandoned Jack in the Box building at 2552 Guadalupe Street, as seen last year. Photo by James Rambin.

Still, it would be irresponsible of me not to keep us all up to date on the project after making fun of it so much, so here’s the latest info on the 158-key hotel headed to the abandoned Jack in the Box site at 2552 Guadalupe Street. New city filings give us colored elevations of the upcoming building, along with additional layout info and floor plans — if current documents are to be believed, the hotel should start construction later this year, with a targeted completion date in late 2020.

Thanks to its compact rooms, which start at 183 square feet, the Moxy fits the whole shebang into four floors, with two additional subterranean levels of parking below — that comes out to 89,275 square feet of floor area in total, including the garage space, which almost entirely fills out the small site’s total area of 0.384 acres. Here’s a look at the building’s appearance, via Dallas architecture firm HKS: An architectural illustration of the Moxy Hotel, as seen from Guadalupe Street in this perspective. Image: HKS Architects

The hotel’s ground floor, which includes the bar and lobby lounge designs typical for the Moxy brand, features Great Streets-compliant improvements on the three streets it faces — San Antonio, West 26th, and Guadalupe Streets, with the southern elevation of the building against the (fantastic) dive bar Hole in the Wall next door. There also appears to be a restaurant on the ground floor facing Guadalupe Street, identified in the elevations above as “Taco Mercado,” which could definitely be a placeholder name.

An illustration of the southern-facing elevation of the Moxy Hotel, which connects with the Hole in the Wall bar on this side. Image: HKS Architects

You see that Stevie Ray Vaughan mural on the right side of the building’s southern face up there? Here’s a closer look: Detail from an architectural drawing of a mural shown on the southern-facing elevation of the Moxy Hotel. Image: HKS Architects.

Tacos and Stevie Ray? Forget what I said before, these folks did their research. Despite my complaints about what I perceive as inauthentic branding — which, let’s be real, are equally, if not more pretentious than the brand’s identity itself — it’s nice to see West Campus, perhaps Austin’s boldest experiment in high-density urban design, getting a hotel with what seems to be a more vibrant ground-floor usage than your average mid-market brand.

But can the Moxy Hotel’s bar really compete with the $3 Lone Star drafts at the Hole in the Wall next door? If nothing else, the bathrooms will probably be cleaner. 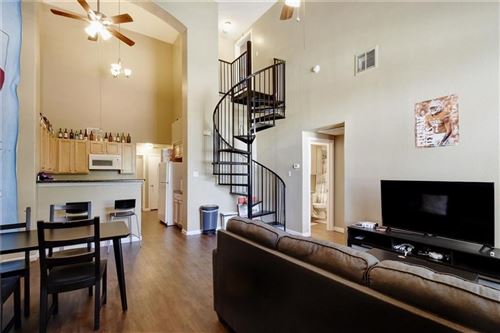 West Campus Is The Envy of Austin's New Urbanists