A current view of the Windsor Village shopping center, originally completed in 1960. Photo by James Rambin.

Windsor Village, the first shopping center opened in the midcentury Windsor Park neighborhood of East Austin in 1960, could someday host a transformative redevelopment of its property into a major residential and retail complex courtesy of prominent Houston-based commercial real estate firm Transwestern.

That’s at least the admittedly murky impression from pre-development documents related to the project, indicating that a plan of the density allowed by existing code could bring roughly 650,000 square feet of mixed-use development, described here as split across two phases of construction, to the 12.36-acre tract currently occupied by the Windsor Village shopping center and its parking lot at 5811 Berkman Drive — making this the largest project of its kind imagined for the neighborhood so far.

The only view we have of this compelling possibility comes from a consultation document filed with the city last summer, related to the preservation and removal of existing trees on the property — but from the information found inside we can at least get a very rough idea of the scale a redevelopment at this site could achieve: A pre-development document related to the preservation and removal of various trees on the Windsor Village property, showing the potential layout, scale, square footages, and other information related to a redevelopment of the site. Click for a larger view. Image: KBGE / Transwestern / Wilder Belshaw Architects / City of Austin

The project concept, which currently only uses the name Windsor in these few available documents, is described here as containing 396 residential units in its first phase, spread between one large five-story building and three smaller detached structures, each of them three floors tall — the latter structures are labeled as “Texas Garden”-style buildings, and we’re not sure exactly what that means, except that they’re described as containing garages on their first level. This phase would also bring 15,000 square feet of new retail space to the property near Berkman Drive, with what appears to be some residential units built atop that retail.

In the second phase, per the document we’d see an additional five-story residential building with an integrated garage structure, bringing 310 more units to market — if you’re keeping track, that puts its final residential unit count at 706 when all’s said and done. Between its surface and garage parking, after the completion of both development phases the project would also contain more than 900 parking spaces. There’s obviously no timeline established for either phase, not even a site plan filed, so at this stage we’re just dreaming slightly more informed dreams than usual.

Still, one of the more interesting details of the layout seen above is its possible preservation of the old shopping center’s southwest corner, previously home to an anchor retail space originally containing grocery store Rylander’s when the complex opened in 1960, but most recently occupied by a now-shuttered Bealls department store. On the far west side of this structure, you’ll find the restaurant and bar Hank’s. This section of the concept’s larger plan appears to keep at least some portion of the existing restaurant (Hank’s) and retail space (the closed Bealls department store) at the southwest corner of the site, but it’s also not super clear what’s going on here. Click for a larger view. Image: KBGE / Transwestern / Wilder Belshaw Architects / City of Austin

As seen in the detail above, the one document we have with a view of the potential project’s layout shows that section of the building — labeled “existing restaurant and retail” — seemingly remaining, with new development surrounding it.

We feel it’s necessary to remind you all once again that this project is obviously in an extremely conceptual stage at the moment, and not a soul directly associated with its developers will say a word about it for the time being — but the potential of keeping that old grocery store space is enormous, especially if neighborhood gossip is correct and the Windsor project’s developers find a new grocery tenant to fill that space. Again, it’s just what we heard, and it could literally be fake news, so please don’t go running around telling people this is the case — but hey, we also heard the folks over at Hank’s are reportedly not expecting to move out any time soon. Who knows?

Even though we can’t count on it for now, keeping the old grocery store section of the Windsor Village shopping center would represent an admirable preservation of architecture you might not realize has a ton of character, owing to the fact that everything interesting about it is bafflingly covered up with generic stucco cladding at the moment — see the street view of the old Bealls space above. Though it’s not prominent compared to many of their projects, in keeping with the midcentury era of the Windsor Park neighborhood’s development, its first shopping center was designed by the firm of local Modernist superstars Arthur Fehr and Charles Granger.

A selection of a 1960 newspaper ad for the grand opening of the Windsor Village shopping center, showing off the original appearance of the building. Image: Austin History Center

Better known for buildings like the Mueller airport terminal and its instantly-iconic control tower, Fehr & Granger’s original design for Windsor Village also has a touch of that space-age “Jetsons” look with the grocery store’s zig-zagging front awning taking center stage as seen in the illustration above. Why someone thought this feature needed to be covered up remains an open question, but we’d be happy to see the structure restored — especially if it brings some new grocery options with it.

The project’s at such an early stage in its realization that this kind of speculation is basically all we can do, but the sheer possibility represented in the one view we do have for a potential redevelopment is enough to keep us following this plan for however long it takes to emerge in earnest. After all, this is more than 12 acres we’re talking about — for what it’s worth, that’s a minimum of two full acres larger than Saltillo, and it’s in the middle of a neighborhood instead of next to a highway!

More importantly, no matter what happens here, Windsor Park’s residents seem fairly excited about the possibilities. That’s something you can’t always say about dense development in suburban regions of central Austin, and it feels pretty good to entertain the notion that people living nearby might actually like whatever comes next at Windsor Village. We’d certainly like to know more. 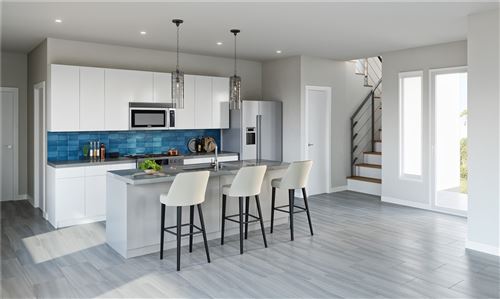