North Loop, a diminutive neighborhood of postwar craftsman-style homes named for the boulevard that horizontally bisects it, functions as a sort of living history museum for the laid-back Austin vibe that brought the city so much attention in the first place. Its quirky, walkable central commercial district, its unpretentious bars, restaurants, and coffee shops — they’re all reminiscent of a time when you didn’t need millions of dollars or the guidance of a holding company to operate a small business in the city, and the character shines through all over 78751.

Austin arguably gets more normal every year, but North Loop’s weirdness lives on, close enough to absorb the central city’s culture but far enough from downtown to resist aggressive development, at least for the moment. Despite the neighborhood’s relative proximity to the University of Texas, it hasn’t garnered the same attention or hip reputation of its larger neighbor, Hyde Park. I suspect folks here prefer it that way.

You might want to sneak out of the office early to catch the happy hour (Wednesday – Friday, 3 p.m. – 6 p.m.) at House Pizzeria, the area’s current dine-in parlor of record. Quiet, sunny indoor and outdoor seating makes for great traffic-watching along Airport Boulevard, and the current happy hour price of $11.75 for a pitcher of Live Oak Hefeweizen doesn’t hurt either — if you keep up with these sorts of things, that’s really cheap.

The restaurant’s menu has a knack for odd flavor combinations that make perfect sense once you taste them: The most outstanding choice, the Blue ($12.75), is a simple pie topped with fresh mozzarella and Stilton cheeses drizzled with a port wine reduction. It’s hard to justify throwing around words like “legendary” while describing a pizza, but then again, you haven’t tried this pizza.

Only open for the warmer half of the year, Casey’s New Orleans Snowballs has served shaved ice to Austinites out of a tiny converted home at the corner of 51st Street and Airport Boulevard since 1996. This kind of longevity for a seasonal brick and mortar business is one of North Loop’s pleasant anachronisms, but locals don’t seem to question its success — after all, the snowballs are good.

The stand’s dizzying array of flavor syrups are all made with cane sugar, meaning you’ll probably be satisfied by a small ($3), which is really anything but. Casey’s flavors include New Orleans shibboleths like nectar and wedding cake, but you really can’t go wrong with strawberry.

North Loop proper doesn’t have any hotels to speak of, but the short-term rental market provides more local options. One particularly unforgettable rental on the far east side of the neighborhood is a tiny trailer park tucked away in the backyard of a home just a few blocks north of 51st Street, with two 1950s-era Shasta travel trailers and a fire pit providing an extremely Instagram-worthy urban campout. At the time of writing, the rental cost with tax for a Friday night was around $110.

They call this “Glamping,” just FYI. Photo by James Rambin.

As far as neighborhood bars go, North Loop has at least two contenders in Workhorse Bar and Barfly’s. The former might argue for its top status on the basis of serving excellent burgers ($8.75 without cheese) in addition to cheap drinks, but Barfly’s wins in my mind on atmosphere alone. Nobody ever called the exterior of Barfly’s welcoming. Photo by James Rambin.

Located in a windowless, vaguely threatening attic space atop a burger joint, accessible only via precarious external staircase and illuminated with the grace of a haunted house, Barfly’s is a Rorschach test for your feelings on dive bars in general — it will quickly become either your favorite or least favorite place. No beers are on draft, but $2 Pearl cans ought to make up for that. It’s an easy place to start your night and accidentally never leave, unless you’re set on a drink with more than two ingredients.

Every Friday night at 10 p.m., the ColdTowne Theater on Airport Boulevard hosts Live at ColdTowne, a stand-up comedy showcase with about 10 acts, ranging from professionals to open mic-style amateurs ($5 for earlybird tickets, $8 at the door). The show’s general format changes from week to week, but one thing you can always count on? The theatre is BYOB. “Rare and unique” is a great way to describe the vault of strange and forgotten films at I Luv Video. Photo by James Rambin.

Next door to ColdTowne is I Luv Video, a movie rental spot somehow still humming along in the age of Netflix thanks to the magic of North Loop. The depth of its selection is truly mind-boggling — these guys somehow manage to find enough movies to fill out a shelf labeled “Stoner Horror.” The shop also still proudly carries a huge selection of VHS tapes, rentable for $2 a week. Good luck finding an Airbnb with a VCR. 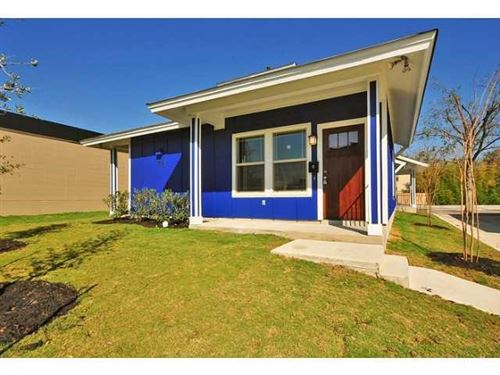 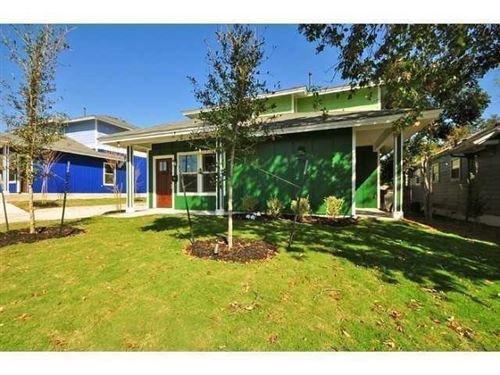 Most breakfast options in the neighborhood arrive via food truck, and Biscuits + Groovy is no exception to this (very pleasant) rule. The magic combination of freshly-baked buttermilk biscuits and peppery cream gravy is hard to beat when it comes to eating away the sins of the night before, but the menu also allows for a few interesting variations on the theme, with the Johnny Hash ($10) loading the basic biscuits and gravy with potatoes, maple bacon, sausage, and colby jack. Still, there’s no shame in sticking with the original combo ($7), three biscuits topped with gravy, sausage, and chives. It’s fine, you’ll do a lot of walking today.

Shopping of all stripes is supported by the row of businesses along North Loop Boulevard in the center of the neighborhood, one of the city’s eight Independent Business Investment Zones (IBIZ). The IBIZ program, sponsored by the Austin Independent Business Alliance, seeks to retain shops with local flavor in neighborhoods around town, and North Loop might be one of its most successful examples.

Five vintage shops exist in harmony on a quarter mile stretch of the boulevard, with four on the same block: Ermine Vintage, Room Service Vintage, Revival Vintage, and Big Bertha’s Paradise Vintage; with Blue Velvet further west down the street. The amount of time you’re willing to spend poring through the decades on display at these shops is directly correlated with how much money you’d prefer to part with, because the supply of thoughtfully-curated kitsch is functionally endless.

Biscuits and gravy have a way of sticking around, but after sifting through nearly a century of other people’s stuff you might find yourself in need of a recharge. Sala & Betty, a New American-style cafe in a converted cafeteria space on Airport Boulevard, is the unlikely brainchild of local chef Theresa Wilson. She’s formerly known in the city for perfecting elegant French cuisine at Aquarelle, so if you’re wondering what she’s doing in North Loop, let me direct your attention to the fact that the restaurant also features a drive-through window.

That’s certainly one way to endear yourself to a laid-back neighborhood, but it helps that the food’s great too. The soup and sandwich-heavy lunch menu gets the point across for about half the price of dinner service, particularly in the case of the Mr. T ($10), a sandwich with smoked Wagyu sirloin, blue cheese sauce, and fries — served inside the sandwich, naturally. It’s steak frites on bread for the price of an appetizer at most places with the word “Wagyu” on the menu, what more do you want? A mural on the side of the North Loop Food Store. Photo by James Rambin.

4 p.m. – The Shopping Will Continue Until Morale Improves

Even if you burned yourself out hard on vintage boutiques, there are still a lot of local shops to check out in the neighborhood. Down the street from your previous vintage shop binge you’ll find Breakaway Records, a safe heaven for vinyl enthusiasts with a staggering collection of new and used LPs, including a selection of less sought-after records for $1 apiece. You could wallpaper your apartment with those things.

In a block of warehouses along North Lamar Boulevard, also known as North Loop’s western border, you’ll find Texas Saké Company, its name painted on precisely the wrong side of the building for anyone to see it from the street. Rice to meet you. Photo by James Rambin.

Between the obscure location and the fact that its tasting room is only open on Friday and Saturday nights from 6 – 11 p.m., I’m not sure how many people know it exists, but now you’ve got no excuse: Someone in Austin is brewing small-batch craft Saké, and it’s time to try it. As it turns out, the company was the first independent brewery in the nation to produce the rice-based beverage. North Loop strikes again!

After all your visits to the businesses lining North Loop Boulevard, it would be a waste to never get a closer look at Phara’s Mediterranean Cuisine. The restaurant wholeheartedly embraces its kitschy Egyptian vibe, complete with hookah lounge and bellydancing at 8 p.m. Tuesday through Sunday.

The menu doesn’t stray far from what you might expect from the genre, with capable hummus ($6) and dolmas ($7) brightened up with pomegranate sauce. The lamb shish kebab ($18) is a particularly impressive highlight, grilled with mango garlic marinade and served skewer-style with basmati and vegetables. After-dinner hookahs, if you’re inclined towards that sort of thing, range between $18 – $23 for different flavored tobacco blends. Phara’s is also BYOB, charging a $3 corkage fee.

The Tigress Pub, just across from Phara’s on North Loop Boulevard, was the first bar to arrive on the street in 2010, and remains the best spot nearby for upscale cocktails without the fuss. The drink menu goes in plenty of creative directions, but you can’t go wrong ordering a Negroni ($8). This one’s made with Treaty Oak’s Waterloo gin, and it’s a perfect way to toast the last night of your successful staycation — unless, of course, you’ve got a hankering to go back to Barfly’s for a few more $2 beers.

If you’re trying to avoid devotees of the brunch lifestyle and keep things down to earth, it’s time to head to the Omelettry. They’ve secretly been serving the best omelettes and pancakes in Austin since 1978, and the diner managed to hang on to its funky atmosphere even after rising property values forced it to relocate from its colorful shack on Burnet Road to a strip mall on Airport Boulevard in 2015. They’ve even kept the tablecloths, thank goodness.

The ham and cheese omelette ($9.15) is the perfect expression of American breakfast food, particularly if you’re bold enough to choose a short stack of buttermilk pancakes as your side option.

It’s so good, in fact, that we’re deliberately ignoring the diner’s location, slightly south of what’s generally considered the southern border of the North Loop region. After all, arguing about the boundaries of neighborhoods isn’t very Austin, is it?

$849,000
34
Previous Post: « Gateway Arch to Welcome Visitors on Sixth Street
Next Post: Counting Down to Condo Conversion at Zilkr on the Park Apartments »